How to Make Mardi Gras Cocktails 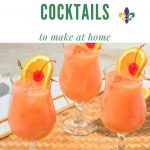 There are a handful of places that do Mardi Gras right: Rio, Venice, and, of course, New Orleans. If you can’t get to one of these please, you can make one of these Mardi Gras cocktails at home.

The day before Catholics head into Lent, Mardi Gras is license to eat and drink those things we may be giving up. It’s celebration as old as, if not older than, New Orleans itself.

Home bartender or not, it’s likely you may have heard of one or more of these cocktails before, without knowing that they were all invented in New Orleans. These five classic Mardi Gras cocktails can claim to be residents of the city that celebrates this yearly holiday in style!

Here are five of Mardi Gras classics to try at home!

Probably the most famous cocktail invented in New Orleans, the Sazerac has remained a classic cocktail since it was trademarked in 1900. Remember it's all about the Peychaud’s bitters!

Love it or hate it, made well the Hurricane can be a delicious parry drink. Just take the time to make it from scratch!

A New Orleans classic, the Ramos Gin Fizz was created by Henry Charles “Carl” Ramos at the Imperial Cabinet Saloon in 1888! Since then it has become one of the city's enduring classics!

I can't help thinking that Tennessee Williams wrote his play about the cocktail. It is old time NOLA in a class. If you can't have it where it was invented bartender at the Carousel Bar of the Hotel Monteleone, then make it at home.

It has the word French in its name, so it has to be French, right? Named for a field gun used by the French in WWI, the French 75 is the delicious combination of gin, fresh lemon juice, sugar with the very French Champagne and most definitely from New Orleans.

Follow me on Pinterest for loads of great recipes and much more!! Just click the little red pin button at the top of each recipe card!

Disclaimer: Some of these posts contain affiliate links. I may receive compensation if you click on these links and buy something, but, don’t worry, it won’t cost you a dime!
How to Make a Hurricane
How to Make the Starward Left-Field New York Sour